Iâ€™m not a beach babe. Iâ€™m about as comfortable in a bikini as I am in high heels, which is not at all. I know virtually nothing about the ocean except for the minimal amount of knowledge I gained when I, like many young girls, had aspirations to become the next Jaque Custeu.

Iâ€™m a mountain girl from Colorado. I prefer to sleep on the ground, opt for wearing a hat instead of washing my hair, drink coffee with grounds in it, everything I own fits into my truck, I howl with the coyotes, and drink micro brewed beer. If youâ€™re reading this youâ€™re probably wondering what this â€œdirt bagâ€ has to do with â€˜Higher Tidesâ€™? Well, we have one thing in common, something that rules over almost everything else in my lifeâ€¦surfing.

So many people romanticize about being a surfer at some point in their life. Some fulfill this desire others donâ€™t; using distance, jobs, money, etcâ€¦ as an excuse. Once I was old enough I was prepared to move to the beach and fulfill that fantasy. I went to college, dropped out, became a snowboard bum, a raft guide, went back to college, and dropped out againâ€¦classic. Never finding my way to the beach.

As a raft guide I discovered stand up paddling on the river. I thought it was the craziest thing I had ever seen and I had to be part of it. My past time turned into me seeing if I could make it through whitewater standing up. It wasnâ€™t surfing but it was as close as I could get.

After a year of paddling downstream I found river surfing. In my hometown of Glenwood Springs a whitewater park was built. Originally, this wave was designed with the kayaker in mind but eventually people began to realize you could actually surf it. For those who have never seen or heard of it, it can be difficult to comprehend. So here are some visualsâ€¦ 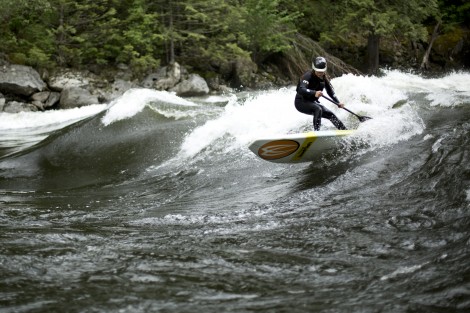 Since this obsession began I havenâ€™t stopped. Iâ€™ve been on a never ending search for new waves and encouraging the healthy growth of river surfing. Myself and three other women made a documentary about our search of the â€œperfectâ€ river wave called â€˜Can I Surf Thatâ€™. Itâ€™s an ever changing, rapidly growing sport, and Iâ€™m so damn happy to be part of it.

My travels havenâ€™t let up and I continue to live a life of perpetual motion. Iâ€™ll be documenting it regularly here on Higher Tides. So I hope youâ€™ll follow my travels and river surfing adventures while supporting this awesome company!

To Health and Highwater,