The cicadas hummed and the earth, kicked up from our wheels smelled sweet. The sun casting a soft orange across the land as Africa cradled it in her arms. The shuttle vehicle rattled as we sped down the unmaintained dirt road. A solemn silence spilled over the crew, I knew we were all just processing what we had just done. It was our last day in Zimbabwe and we had just become the first people to stand up paddle the Zambezi River.

I remember watching videos of the Zambezi River and thinking someday I will raft the Zambezi. Little did I know four years later I would be paddling it on a board. As I found myself standing above some of the biggest whitewater I had ever seen I was wondering if I should have stuck with my original plan and opted for the raft. The echo of the whitewater off the high and narrow canyon walls stimulated the fight or flight response.

I began to wonder how many people voluntarily have faced the fear Iâ€™m feeling now? And how many people would disregard their instincts and push through that fear? I assume that number to be very low and Iâ€™m one of the few that get to feel as alive as this. So I did it, I pushed through that crippling, stomach churning fear and dropped into rapid number one.

When faced with the possibility of death by drowning or eaten by crocodile what kept me going was the rhinos. This trip wasnâ€™t based on fulfilling some sort of ego-based dream. It wasnâ€™t out of some trivial desire to prove something to myself or to others. The purpose of this trip was to take a new approach to bringing peoples awareness to the dwindling rhino population due to poaching. Paddlers Shane Raw and Bertrand van de berg had the idea to start a crowd funding campaign called â€˜Stand Up 4 Rhinosâ€™. The goal is to raise $10,000 for the orphaned rhino sanctuary â€˜Care for Wildâ€™.

Weâ€™re faced with a crisis. Itâ€™s estimated that one to two rhinos are slaughtered a day by poachers harvesting their horns for the black market. Leaving large numbers of orphaned calfs in their wakeâ€”no one to care for them. The sanctuary has dedicated themselves to protecting and caring for these calfs; risking their lives in the process. 100% of what we raise goes to the NPO. Youâ€™re money will be put towards security equipment (watchtowers, spotlights, etc..) as well as milk and nourishment for the rhinos. 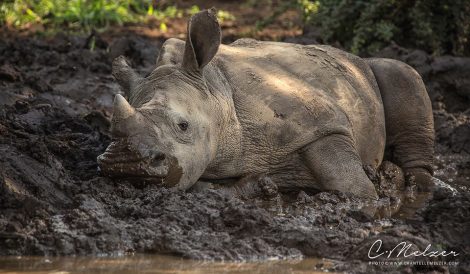 In our lifetime weâ€™ve seen a species of rhino go extinct. This is not a matter that can wait. These helpless animals do not have a voice it is up to us to save them. You can donate anything from $10 to $200. TEN DOLLARS thatâ€™s two lattes!!!

We did our part now its time to do yours.

During this campaign we will be putting our beautiful photography from wildlife photographer Chantelle Melzner as well as a twenty minute documentary. Follow us on instagram at @standup4rhinos. Stay tuned for a full write up from yours truly about the adventure in an upcoming issue of SUP the Mag.

Thank you for your support!