My surfboard traction pad has been on it’s way out for a while now, I’ll be honest. It started out as a little flap on the front corner peeking up, and had been growing larger each surf since. It finally bit the dust on my last trip upcoast when a few falls peeled up most of the left side and part of the right Pad pieces. Guess I was ready for some work and a new Traction Pad anyways!

What you’ll need to remove your traction pad

How to remove the traction pad

The main goal for removing your thrashed traction pad is to get it to peel off in as close to one piece as you can, without causing delamination from the strength of the glue. I’ve seen recommendations to use a blow dryer, a heat gun, the sun,etc with the main goal being to warm up the glue to help it peel up easier.

If you’re me however, nothing will be easy and you’ll have to do everything the hard way. Good thing I like a challenge.

Writer’s Edit (4/5/19) – after the creation of this article, I talked to a couple of shaper friends (bird surfboards & Nightmare shapes) who notified me that the blow dryer is definitely the way to go if you don’t want the struggle I had to deal with down below.

You want to put it on medium heat and make sure not to hold it over one spot, but generally heat the pad up so you make the glue malleable down below.

This should give you an easy time removing your traction in one piece!

Step 1 – Peel up the Traction Pad

Ideally you will start from any corner and slowly peel up trying not to break the foam. To help ease this you can use the blade you have at a angle to get under the pad and slightly slicing away the glue residue and using it to help pry up the traction pad at the contact area.

To help get the glue to come undone you can use some sticky bumps wax remover. This will kill the glue and help it peel way easier than if you use nothing to compete with the 3M glue.

If you’re me however, your pad will be made in a sandwich type construction and only the top half of the traction will peel off leaving the bottom half with all the glue still attached ?. 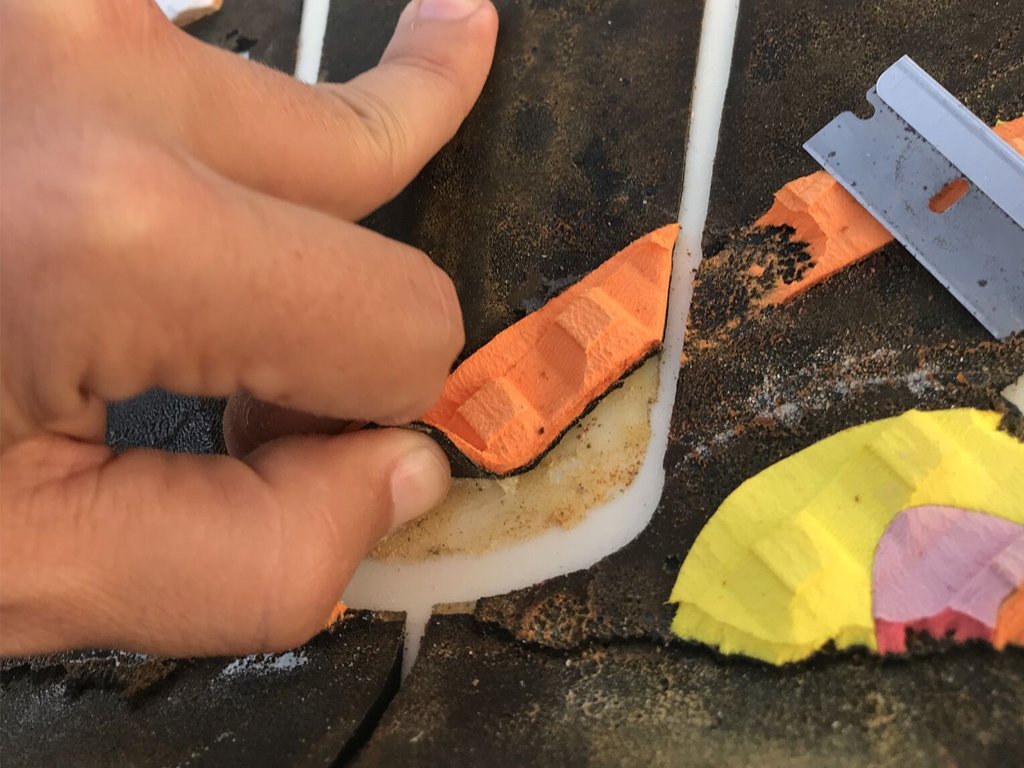 Step 1 is to try to peel up the traction pad manually. As you can see here, it was not going well. 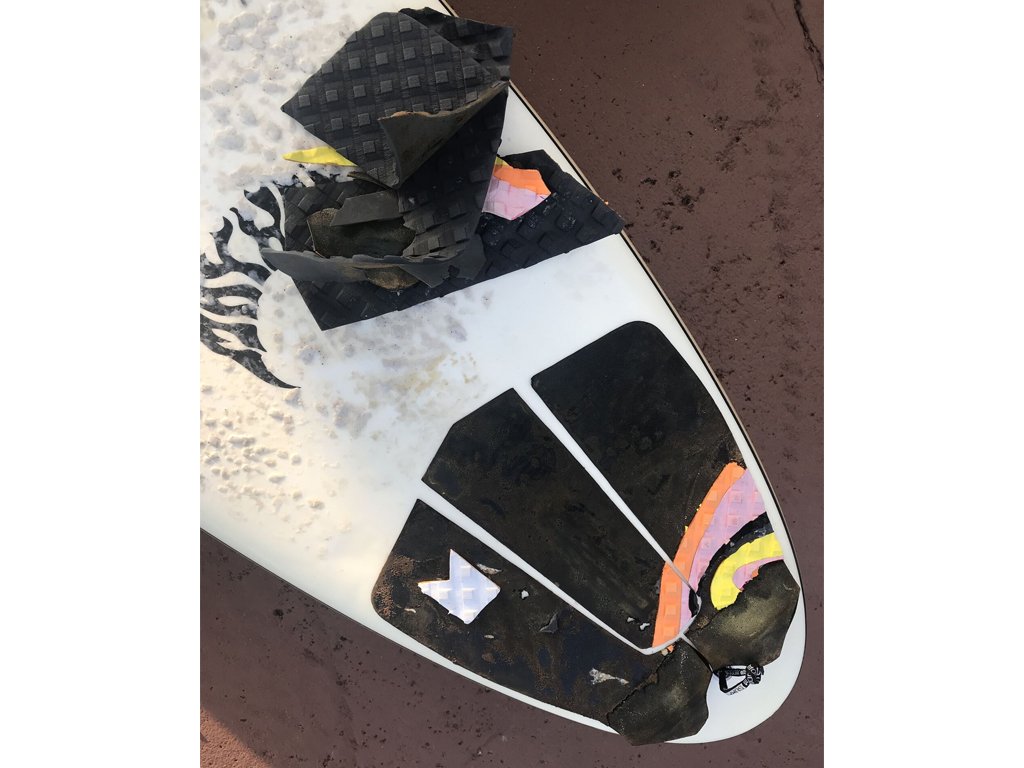 This is the result of my initial peel. Top layers came off, but the bottom glue layers didn’t move. At all. 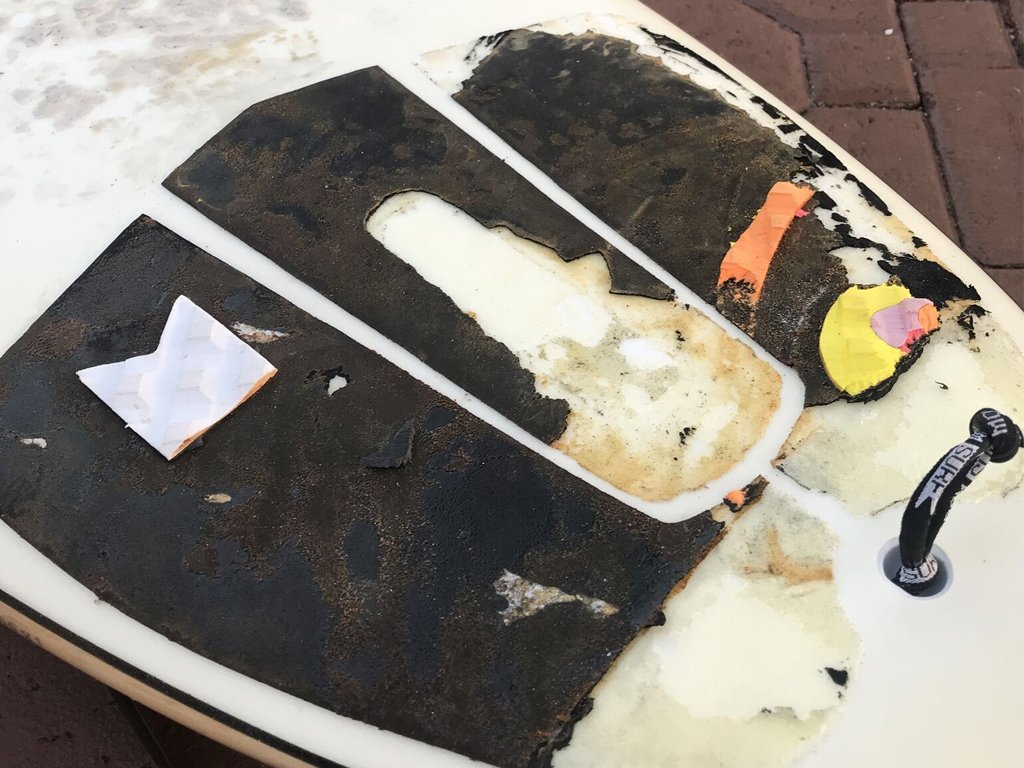 The aftermath of all of the peeling I could get with my hands. Nothing ever goes as planned. Haha.

So if you’re lucky like me, your pad will tear, break in half, or worse, and you’ll be stuck putting in some major elbow grease.

Due to the fact that I was only left with a thin layer of traction with glue on not sides, my process became a little trickier.

You should be able to find some sort of access point to start peeling where a little flap is not attached to the board. For me it was the back of the pad where the stomp section is.

Pour a small amount of wax remover around the area to loosen the glue, and then begin getting under it with your razor blade and and angle somewhere between about 180 and 60 degrees.

This will be enough the get under and start slicing the glue away without cutting the board. It’s easier than it sounds. I didn’t put a knick in my board using this process the whole way.

The pad will be quite a bit easier to pull in this area now so continue to pull until it gets tough again. Reapply wax remover and continue (helpful hint- I found that pulling my blade between the point of contact and the board helped a ton. Basically act as if you’re cutting the traction off the board).

Complete this process until you are able to remove each piece of the traction. This was the most time consuming process for me. Probably took about 1.5-2 hours since my Traction was so messed up. 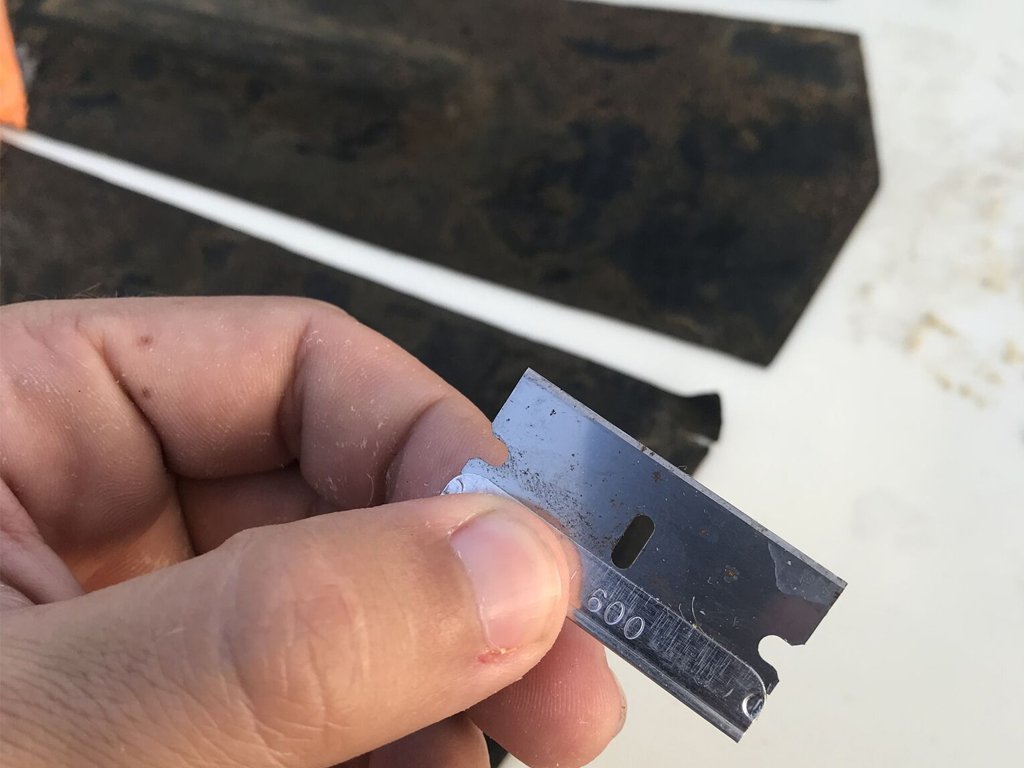 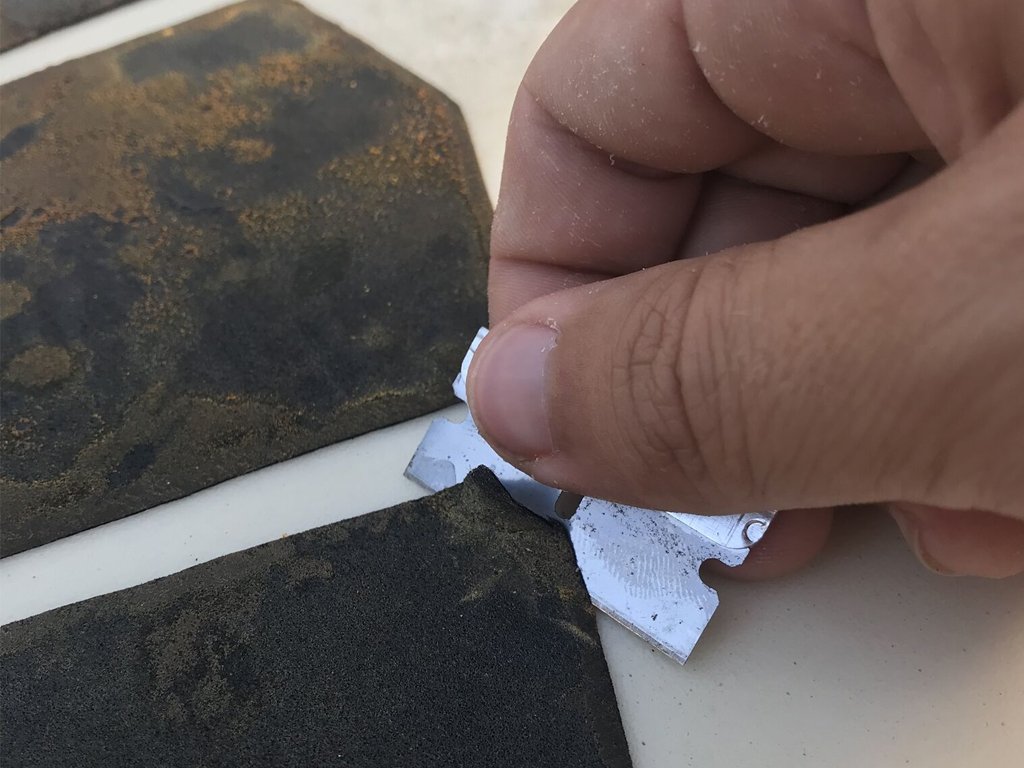 I found that going in around a 130 Degree angle and using a long cutting stroke was pretty efficient at cutting the glue from the board. Keep pressure on the peeled area so it’s tight. 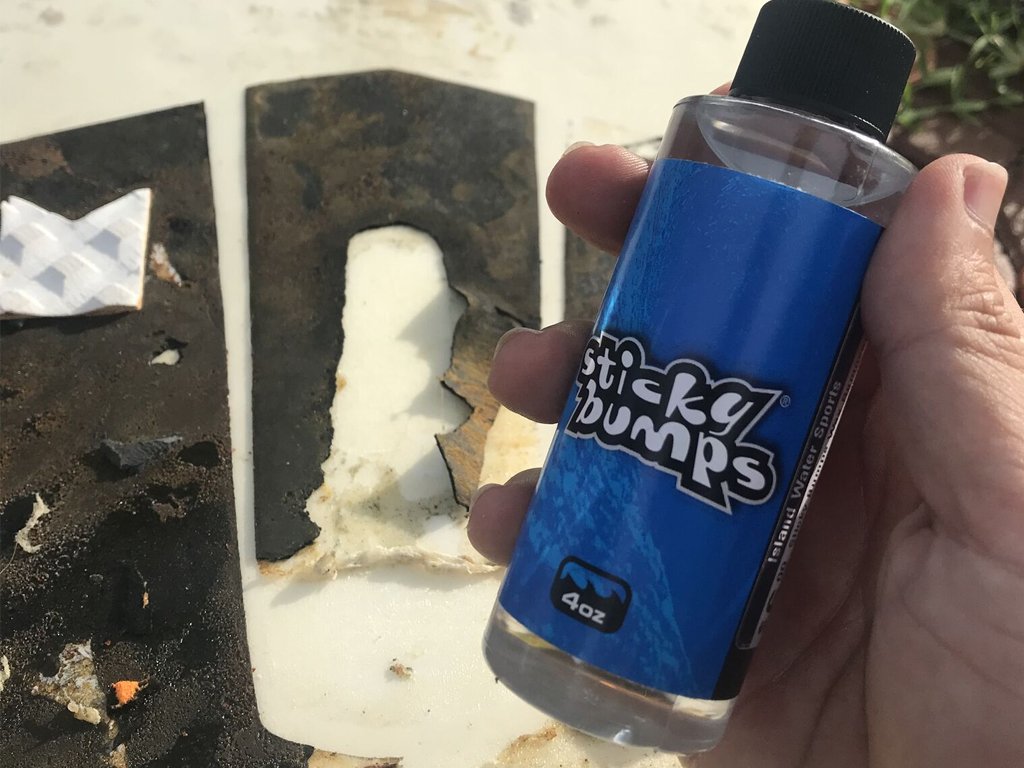 For those hard to get spots, Sticky Bumps Wax Remover came in SUPER handy. It tears the glue right up. Should have started with this. 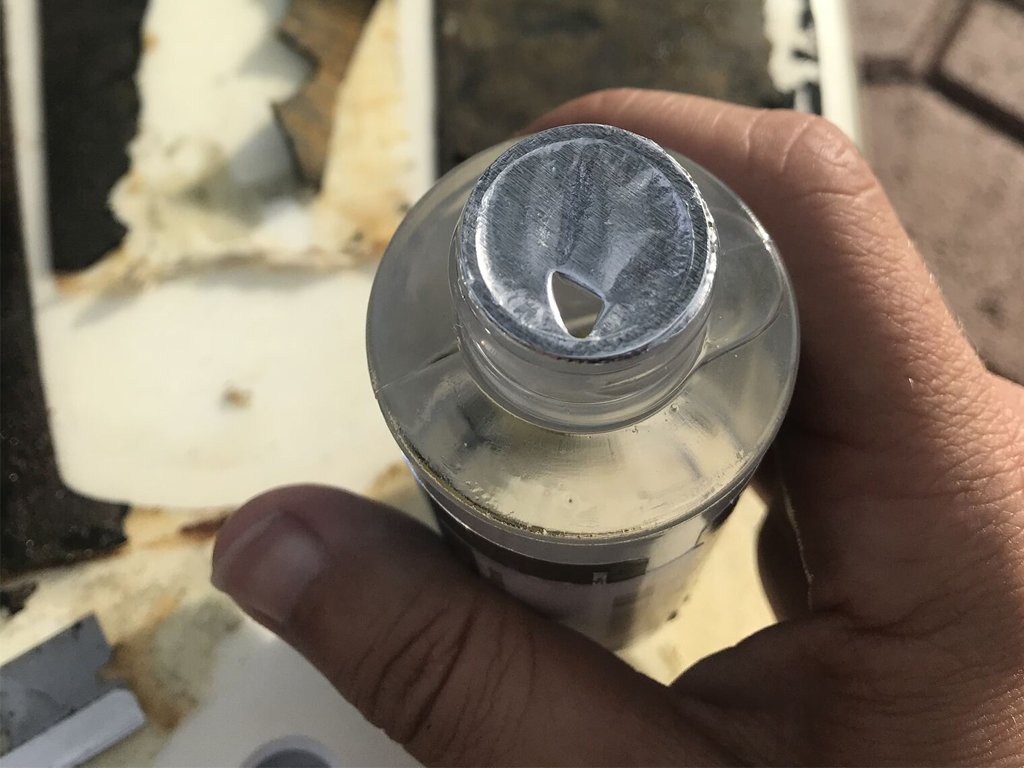 Insider Tip: Use a pencil or toothpick to puncture the seal so you can easily control how much liquid you use. 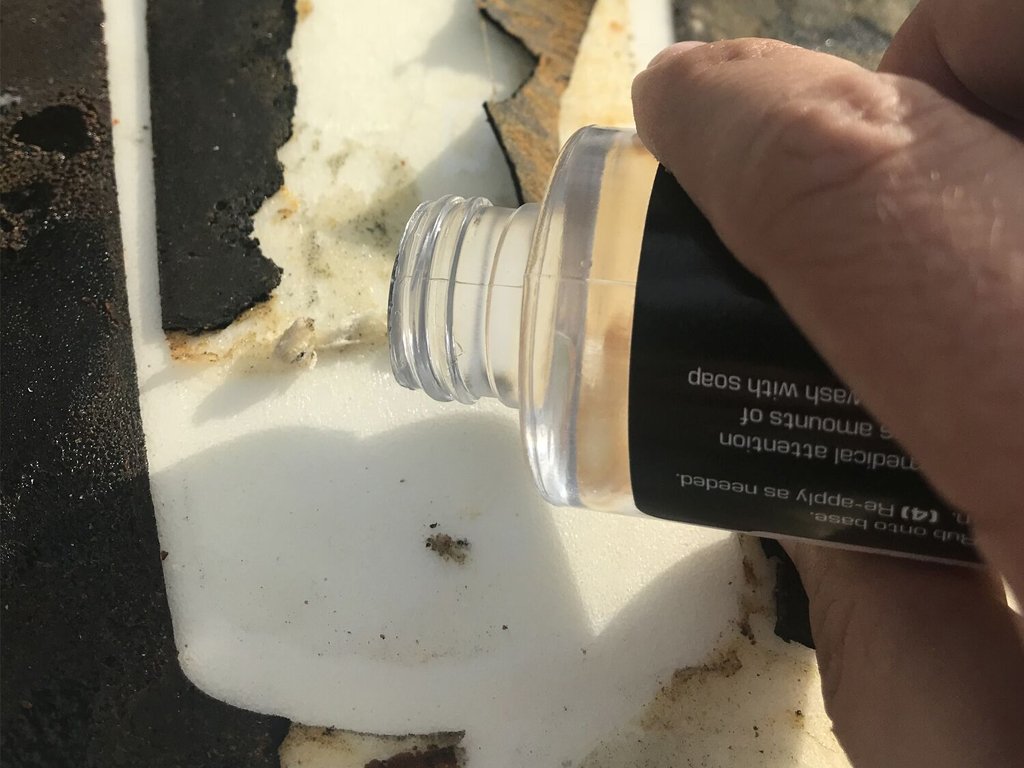 I used a minor to moderate pour depending on how thick the glue was. I used less than 1/8 of the bottle total on this project. 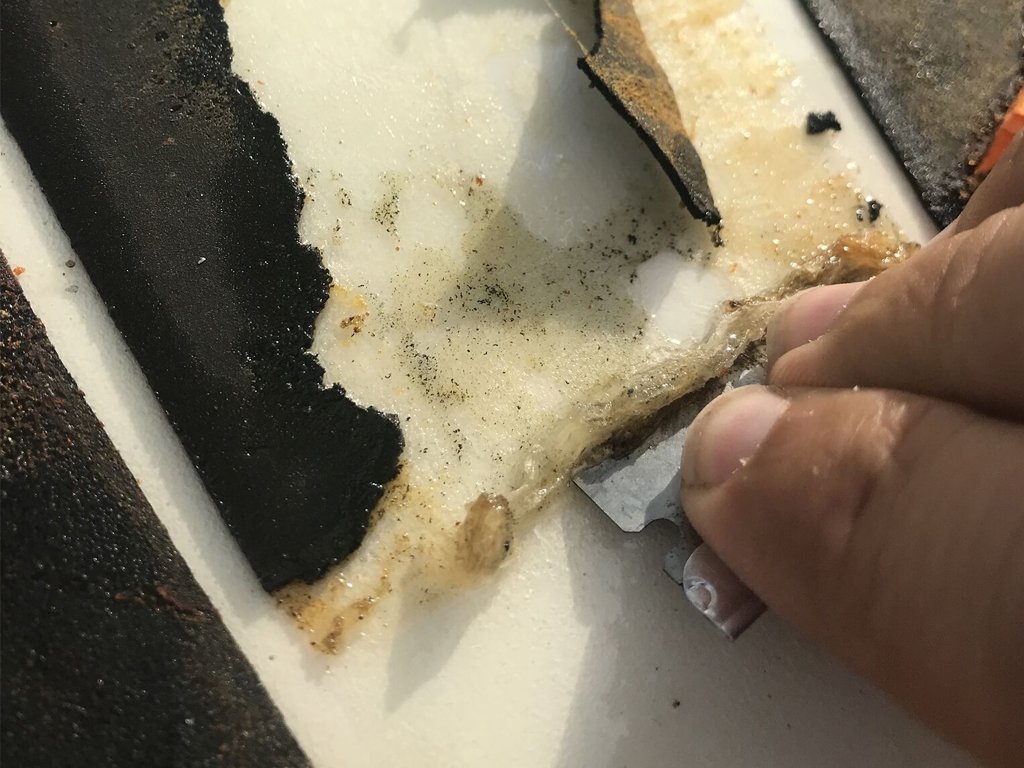 After applied, the glue practically scrapes off the surfboard like butter.

Once your traction pad is fully removed you have to remove as much glue as you can off the deck of your board. This will allow for a greater point of contact when installing your next surfboard traction mat.

At this point I continued to use my blade along with a healthy dose of wax remover.

Saturate the section that you’d like to work on, making sure that wax remover covers most of the glue.

Let it sit for 10-15 seconds and then use the blade at a 90 degree angle to start scraping the glue away.

You may have to get your blade to almost horizontal to scrape away some glue so keep that in mind.

If all the glue doesn’t come up, keep applying small amounts of wax remover until it does.

Continue to do this until the board feels like it is brand new. 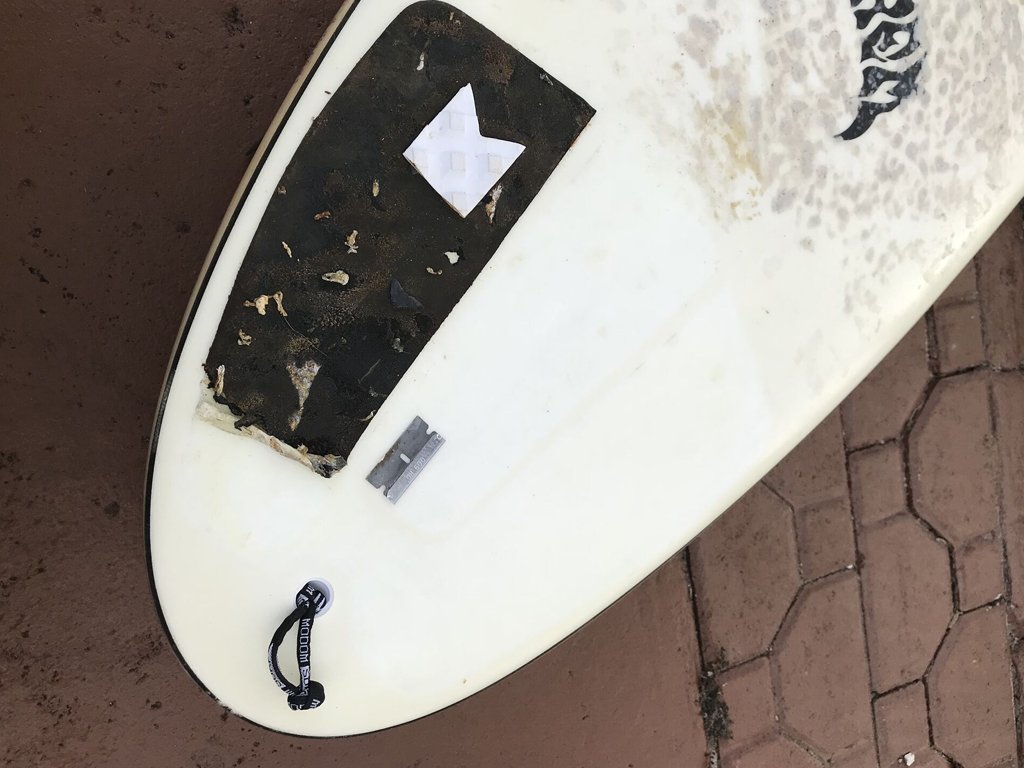 The results of an hour of elbow grease (some without wax remover). Cleaned up pretty nicely, but still a little glue left. We’ll get that later. 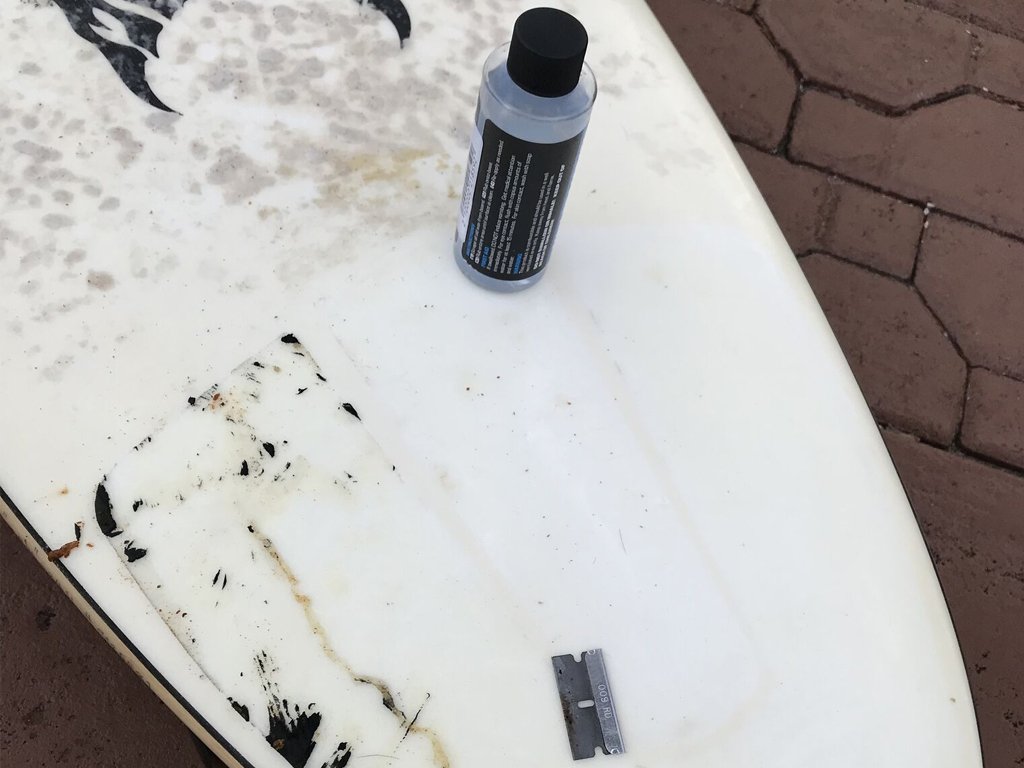 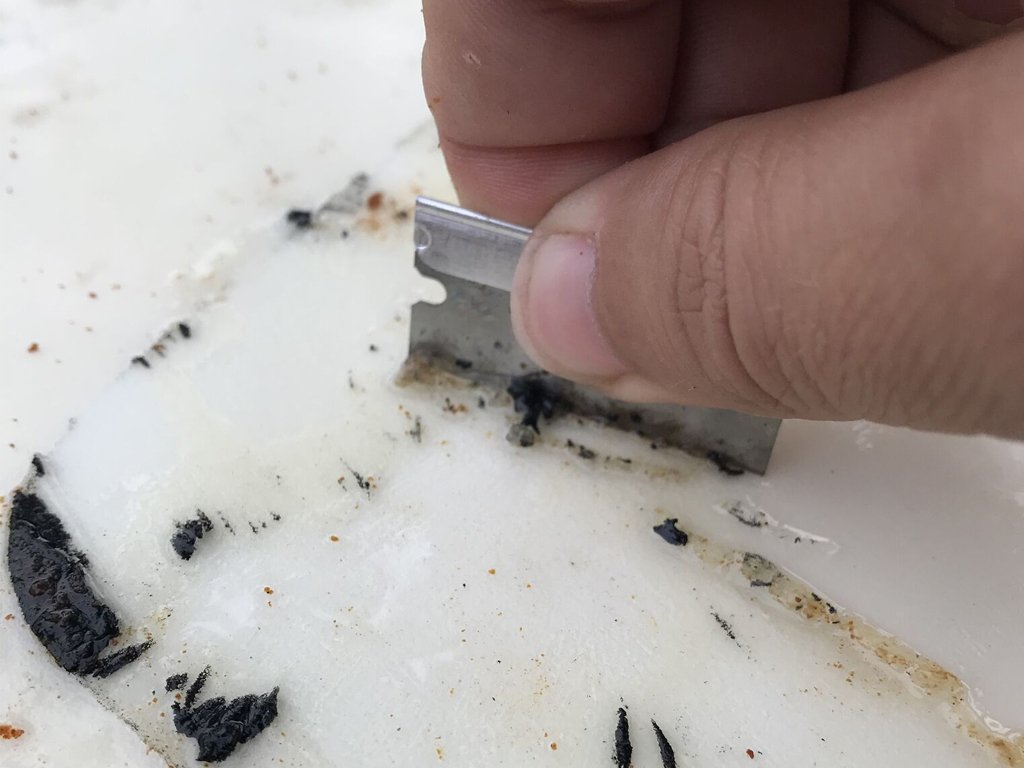 With enough Acetone the glue will literally peel off. Just scrape it over into a lump. 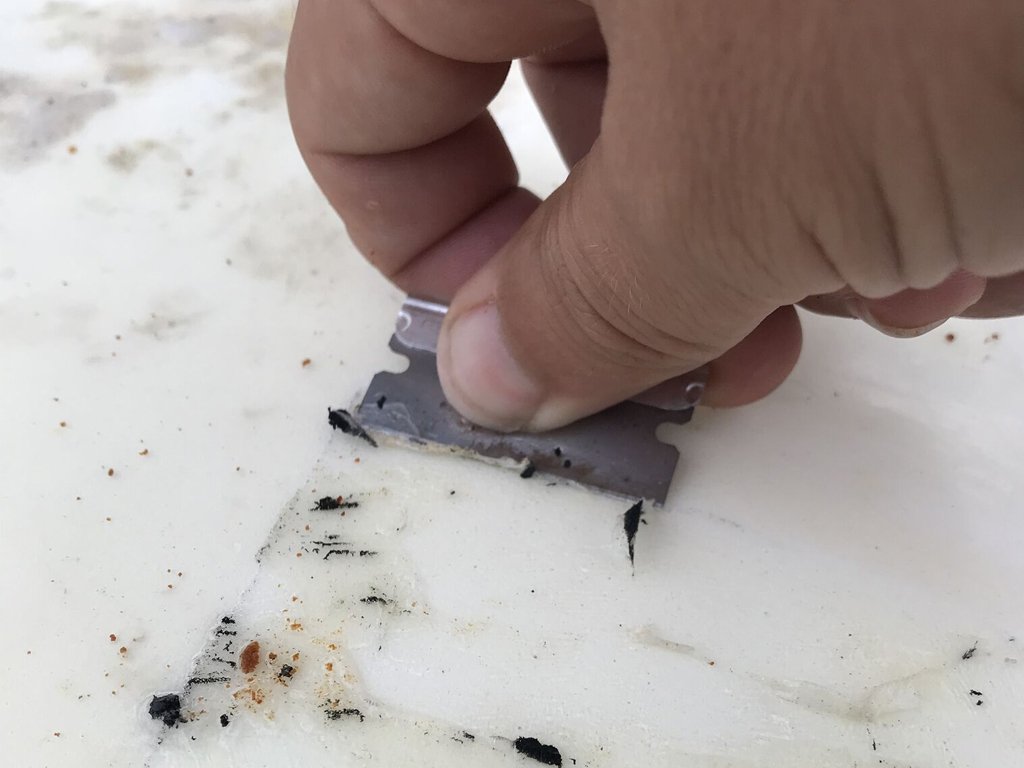 In some heavier areas you may need to get under the glue. Apply some wax remover and then go under it at an angle and it’ll come up.

Step 3 – Clean Up the Surfboard

Once you scrape all of the glue, it is a good idea to get some paper towels and a little more wax remover to clean up the area.

This will allow you to get any places you missed with the blade, and get into any small dents to remove glue.

Apply more wax remover and use a crumpled paper towel being sure to scrub any areas where your paper towel may stick.

Once you get all the glue residue up, it’s time to apply a new traction pad on your surfboard.

Hopefully this process will be quite a bit easier for you than it was for me! 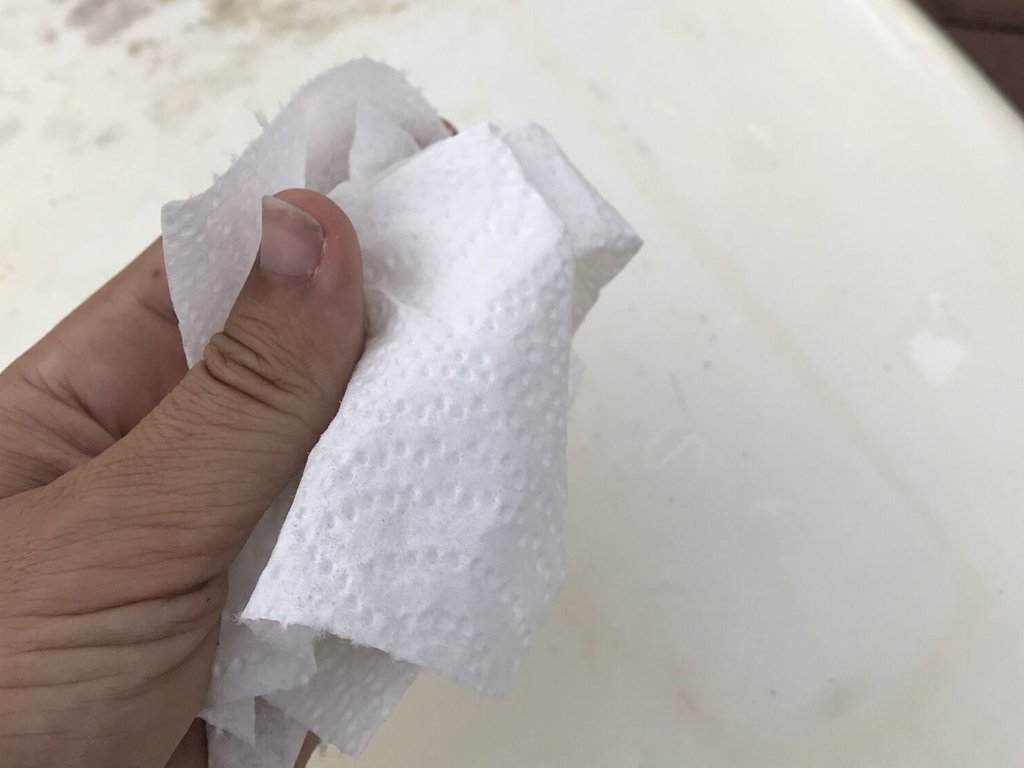 Final Step: Pour wax remover over the whole area and use a paper towel to get into any spots the blade couldn’t get to for a final cleaning. Nothing will be sticky when done.