– Written By Brittany Parker
Women can be their own worst enemy sometimes; allowing society to put them in a box of how they should look & act. Iâ€™ve met many who think their appearance or attractiveness defines them and is a major contributor to their success. Although the latter, in some cases, may be true that doesnâ€™t mean it is ethical nor should we encourage it. But Iâ€™ve seen women allow for this to be their truth and have accepted it as a necessary evil.

This is what I love about the river community. Whether youâ€™re a female kayaker, rafter, or whitewater stand up paddler your going to be noticed for your skill and stoke not for how hot you look in your bikini. Thereâ€™s no need to fret over unshaven legs or when you got your last bikini wax. Weâ€™re not sizing each other up or comparing our bodies. Weâ€™re just stoked to be out paddling with other ladies. What you wear on the river is and should be based on functionality, unless of course itâ€™s a tutu, cow suit, or other outfits of that nature. Nobody cares if your PFD (lifejacket) is from 2017 or 1986 as long as it gets the job done. We wear layers to keep us warm and pads to protect us from rocks. And then thereâ€™s the dry suits, and take my word for it, there is nothing sexy about drysuits (especially peeing out of one). But yet, these women are some of the most badass and sexy women I have ever known. Because they just DONT CARE! 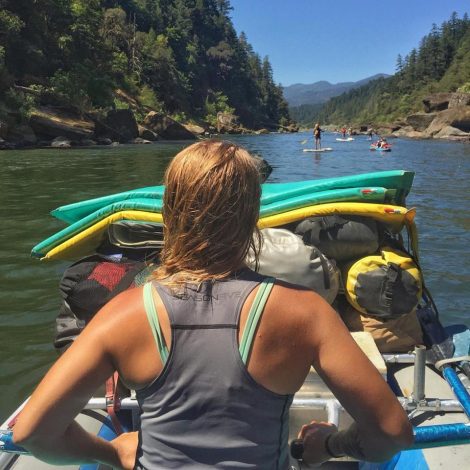 The river culture is perfect for the women who donâ€™t give a fuck. They would rather spend time reading whitewater forums instead of Cosmo. These women are sexy for sending it and that is how it should be. The reason I bring the river community into this is because Iâ€™ve never met more women who are 100% in their power. They are in their power because theyâ€™ve shed all expectations that society puts on women to be primed and polished. They refuse to fall into the trap that so many other male dominated sports have createdâ€¦â€œbeauty is as important as skillâ€.

When a woman takes the time to strip away the beautiful clothes, the make-up, having a regular shower at her disposal, and even a full-length mirrorâ€¦what is she left with? Sheâ€™s forced to really look at herself in the mirror (probably a rear view mirror) and see that underneath all of that she was beautiful all along. We start to recognize that those things are just accessories of expression, not a necessity to feeling good about ourselves or getting ahead.

I will not live in a world where being attractive holds as much weight as skill in determining ones success. I will not stand for discrimination based on appearance. Instead of standing by and accepting things as the way they are we can take a stand. We can speak up and speak out against brands that think weâ€™d rather see a picture of a woman holding a board on the beach in a thong than shredding a wave in said thong. â€œBut sex sellsâ€, they say. It sells because itâ€™s the norm; women and men both are guilty for allowing it to be the norm. So letâ€™s take the time to only support and represent brands that place skill above beauty. And those that donâ€™t, letâ€™s make our voices heard, take your business elsewhere and tell them why.

I have the tiniest voice and I know this will probably only move or motivate the small number of people who probably actually read my blog. But itâ€™s a start and Iâ€™ll keep sending my voice out into this infinite digital world of opinions.

And to all you rad river women, living out of cars, showering in rivers, and peeing in bushes youâ€™re the businessâ€¦never change.